In some jurisdictions, evidence for homicides and other serious crimes must be kept indefinitely, even after the death of the accused. That means long-term evidence can accumulate over time and take up a great deal of space.

The Calgary Police Service was renting an evidence warehouse that held property and evidence for the entire city, which was growing rapidly. Although the department’s evidence systems were accredited, the warehouse was relatively distant from police headquarters — and that meant rent, fuel, and commuting time was adding up to a significant long-term cost.

The project planning team decided that a vacant lot adjacent to headquarters provided the ideal opportunity to create a centralized, purpose-built facility for property and evidence storage.

The lot had significant space restrictions, and there were concerns that even a new warehouse could not provide sufficient storage capacity. Because the department needed a lot of storage in a limited space, the planning team called in the local Spacesaver consultant, who showed them how Spacesaver technology could optimize the space. The ActivRAC® Mobilized Storage System and XTend® Mobile High-Bay Storage System would allow them to use the vertical space in the evidence warehouse while also compacting aisles to maximize capacity. Get the full story

Learn how the Calgary Police Service planned for long-term evidence storage and designed an efficient facility.

To ensure a secure chain of custody and streamline workflows, the department worked with Spacesaver to integrate these solutions: 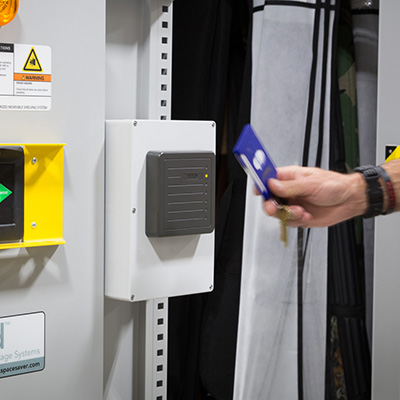 Spacesaver can advise on selecting lifts and planning for lift charging stations and other space concerns.

Contact us to arrange a free on-site consultation with your local Spacesaver distributor.