L ocated in the southern part of San Diego, East Mesa Reentry Facility (EMRF) is situated in the foothills of Otay Mesa, overlooking the Mexican border. Originally a juvenile facility, it reclassified in 2013 as a reentry facility to introduce new work and behavioral therapy programs to male inmates who are incarcerated.

The San Diego County Sherriff’s Department quickly realized they needed more room for a facility of this nature. An expansion, completed in June 2014, opened up 400 additional beds, now providing more room for approximately 1,000 inmates to take educational courses and life-skills classes. Due to the working nature of the facility, EMRF is able to provide more rehabilitative programs than other jails of its size—in addition to earning a GED, inmates are able to earn certifications in many trades such as construction, computer graphics, and printing press operation.

During the expansion, it was clear that EMRF not only had to plan for current needs, but they also had to have an eye on the future. One of the plans was to have eligible split-sentence offenders (a sentence that is split into two parts—incarceration and probation) finish their time at the EMRF instead of at a San Diego jail, which meant the population of the facility was always going to be increasing. The approximate number of inmates currently housed at the East Mesa Reentry Facility. The goal of the facility is to rehabilitate prisoners, introduce work and behavioral programs, and position inmates for a better life with more options upon being released.

Rehabilitation for inmates – and available space

Inmate property bags at EMRF had always been a challenge—but after the expansion, it was clear the space designated for them was woefully inadequate. The inmate property storage system they used—hanging garment bags—seemed to still be doing the trick, but they needed to replicate the system so that it was enough to hold the property of 1,000 residents at any given time.

Working with the inmate property storage department at EMRF, Spacesaver designed three 25’ long two-tier 4-post metal shelves, each tier with metal rods at the top that run parallel to the shelf. Engineered this way, each tier was able to provide twice the storage space of the previous solution. Each of the shelves were set up similar to library bookcases to provide enough clearance so staff members could walk in between the shelves and retrieve the necessary items without having be cramped or strain on a ladder.

In order to be a better rehabilitation facility for their inmates, East Mesa knew one of the first steps was to turn the lens on themselves. They needed organized, efficient storage—especially for their inmate property bags.

“East Mesa is now poised for future growth. They’re seeing the changes coming to these types of reentry facilities, and they want to make their storage work for them, not the other way around.”

Increase in personnel means a decrease in space

To prepare for the expansion caused by the reentry facility designation, San Diego County Sherriff’s Department added over 100 employees. However, the personnel increase was difficult to manage when many parts of the EMRF were already lacking space. One of the areas hurting the most were the individual locker rooms for the male and female staff members. Adding additional lockers to the rooms was going to be hard enough—but East Mesa also wanted to increase the width of the lockers from 12” to 18”, so that employees could store all of their necessary gear. And, it was also important that personnel have a place to sit while they were in the locker rooms.

The engineers at Spacesaver came to a conclusion—if there was a way for the locker benches to retract into the lockers—similar to a cutting board that retracts in a kitchen—it would cut down on the space needed in the footprint for places to sit, and the facility would still be able to get the required number of enlarged lockers in the same locker room footprint. 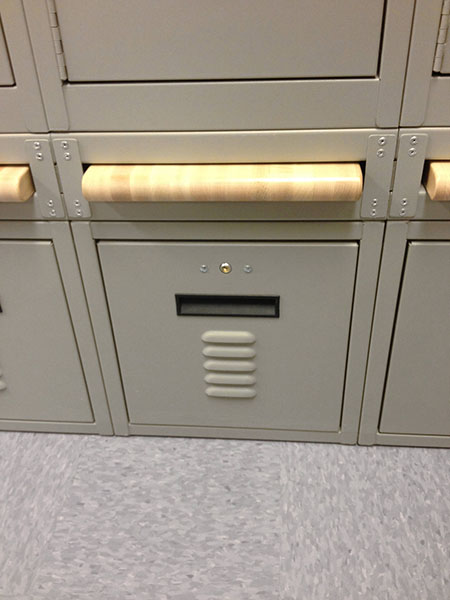 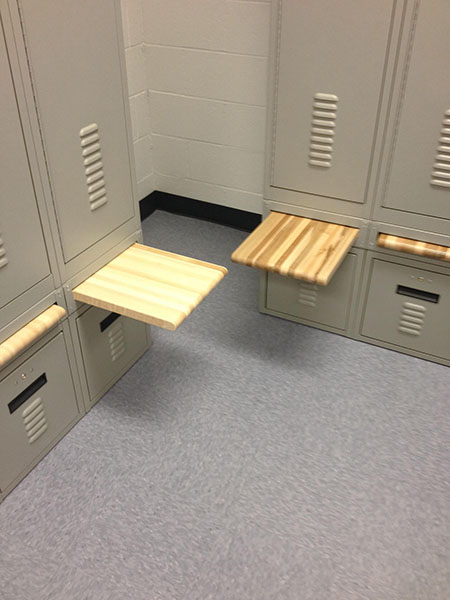 With input from East Mesa, Spacesaver developed several prototypes of a personal storage locker with a bench that could retract into the locker frame. After several tests for weight load and other improvements, the custom locker benches, called Breadboard Benches, were installed in each of the locker rooms.

The retractable locker room seating reduced the depth of each locker by 12”, allowing East Mesa to fit the needed number of lockers into the same footprint. And, because the locker benches were able to retract when need, the Center was also able to increase the width of their lockers like they had wanted—all while still being able to provide seating, weight tested up to 600 lbs., for their staff members.

With efficient storage solutions, the East Mesa Reentry Facility is helping themselves do exactly what they’re committed to doing for their inmates—creating a better structure for their workspace and planning for the future. “East Mesa is now poised for future growth,” Suarez says. “And, their solutions have paved the way for other facilities in the area. They’re seeing the change, and they want to make their storage work for them, not the other way around.”

Renovations, expansions, and new construction—we’ve helped navigate it all. Download our Public Safety brochure to see how we can create smart storage in every area of your detention facility.