Law enforcement personnel must be able to prove that evidence has been stored properly at all times, from the crime scene to the courtroom. Any doubt about how evidence was handled or stored can lead to criminals walking free and crimes going unpunished. Problems with storing long-term evidence can arise because some types of evidence must be stored for decades, or even forever. Evidence tends to accumulate over time, which leads to overcrowding, which leads to disorganization.

This sheriff’s office was storing evidence in a 1930s-era jail that was becoming more unsuitable every year. The facility was receiving about 20,000 items annually and space was getting tight. The aging jail was also susceptible to flooding, which presented the risk of losing or damaging evidence. When the department received funding to design and build a new, state-of-the-art evidence storage facility, the design team called the local Spacesaver consultant to help make the most of the opportunity. Staff can open aisles with the press of a button, via remote control, or with an app. The Spacesaver consultant worked with the design team to optimize space, improve workflows, and lock down the chain of custody in the evidence warehouse. The high-bay evidence storage system eliminates wasted space and provides room to grow in the future. Staff use lifts when they need to store or retrieve evidence on higher shelves. Every aisle has Automated Guided Vehicle technology, or AGV, which allows the mechanical order pickers that move up and down the aisles to be operated with more precision and safety.

The end result is an end-to-end evidence storage and retrieval system that helps ensure that evidence is secure and justice is served. 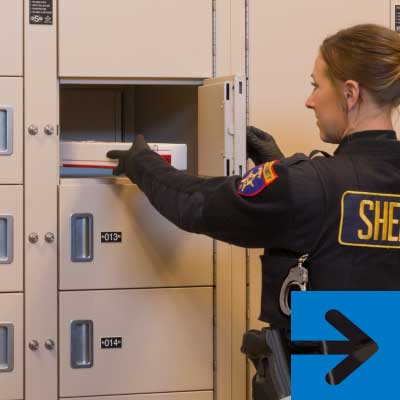 Our law enforcement consultants understand the importance of proper evidence storage. We’ve worked with hundreds of agencies, large and small, throughout the U.S. and Canada to help increase storage capacity and preserve evidence.

Next up in Evidence Storage