Visible Storage at Daytona Museum of Arts and Science

Visible Storage At Daytona Museum Of Arts And Science

A generous patron made a large donation to Daytona MOAS with the stipulation that the museum would add a wing for visible storage. The collection theme for this project was the Napoleonic Age and the challenge was to display as much as possible while still protecting collections.

The architect designed glass walls into a crescent shape along the edge of the new space. Working with the curator, the artifacts were arranged in a meaningful configuration. The design concept called for entirely black shelving and the use of Plexiglas where possible and to incorporate several spotlights to really make the collection pop!

To maintain the project budget, existing art racks were reused and painted black. Wall anchors and tracks were installed by UniStrut, which allowed artwork to move laterally in 4 depths. Existing flat files were also reused and painted black. A local company was enlisted to fabricate custom carts that provided the mechanism by which the files could rotate around the display. Drawers opened in a cascading effect to show off items. For the weapons display, which included rifles, knives and swords, mounting holes were drilled into Plexiglas and the items were affixed to black cantilever frames.

A custom tapestry rack was fabricated as well for a vertical waterfall display. Smaller statues and china collectables were showcased on black, 4-post glass shelving and spotlights.

Ornate sofas and chairs took their place on a black pallet rack toward the back of the display. 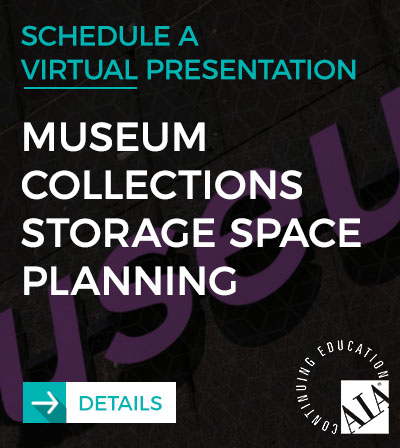 Connect with the experts

When you’re planning a visible storage area for your museum collections, contact Spacesaver to ensure that you’re making the best use of limited space. We can work with your project planning team to design art racks, compactors, cabinets and more to protect collections and promote visibility.

Next up in Museum Storage