Why Seismic Storage is Imperative

When an earthquake strikes, it can cause a significant amount of damage. When such a catastrophe takes place, it’s important to have storage solutions that are not only reliable, but also limit the probability that the occupants of a building will be harmed by falling architectural, mechanical, electrical, and other non-structural components in a building.

High-Density Mobile Storage is built to maintain safety, security, and stability. Each of these elements play an important role when developing seismic storage solutions:

A structural engineer is the only person that is qualified to say which characteristics a mobile shelving system should have. Storage systems—particular mobile storage systems attached to the concrete floor slab—are generally considered to have the same seismic design category as those of the structure they occupy or are attached to.

Our storage consultants are able to work with a structural engineer to identify the seismic design category of the building in question and the corresponding design characteristics that the shelving needs to adhere to. Items such as the rail, anchor plates, end-stops, carriages, and the shelving within the mobile system all are affected by seismic design, and working with Spacesaver offers another level of assurance that the systems are in compliance.

Mobile storage is not specifically mentioned in building codes; however, several guidelines can be applied to making the systems safe for seismic areas. States such as California and Alaska might be the most seismically active regions in the United States, but other areas of the United States are certainly reinforcing their buildings—and the items in them—for potential earthquakes. At the Salt Lake City Public Safety Building, Spacesaver mobile storage are used throughout the space.

Salt Lake City Deputy Chief Tim Doubt says they worked with a local architecture firm to design the building to withstand a 7.5 magnitude earthquake. The department and the firm both collaborated with Spacesaver “to place mobile systems around the struts that keep the building stable,” he says. “So, we won’t lose power or services—and we’ll be able to operate through the earthquake as well as after it.”

In the planning process of Salt Lake City’s Public Safety Building, it was imperative that seismic storage solutions be implemented. Click here to read the full case study of the project and how we were able to assist with the seismic concerns as well as helping the building attain LEED certification. 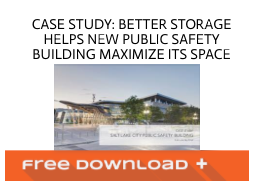