Tulalip Resort Casino, located about an hour north of Seattle, is the largest and most distinctive meeting, gaming, dining, and entertainment destination in Washington State. With 370 guest rooms, numerous restaurants, gaming areas, and nearly 60,000 square feet of banquet and meeting space, the property boasts a complete and diverse destination experience — and as the property grows and changes, so do the pressures on its storage areas.

When Sam Askew joined Tulalip Resort Casino as general manager, he saw several opportunities to improve the property’s back-of-house storage areas. The property was using traditional warehouse racking to store tables, decor, cleaning supplies, and other items, but the storage areas were cramped and ineffective. “There were bins on top of other bins, tables stacked on tables, and more often than not, you had to move something to get to something else,” he said.

“So many properties forego storage space for guest features up front. But heart of the house impacts our guests just as much as new carpets or sofas in the lobby.”

It was a situation he had seen all too many times before. Since storage space doesn’t directly generate revenue, it’s often perceived to have less value. But Askew says that’s a mistaken idea. “So many properties forego storage space for guest features up front,” he said. “But heart of the house impacts our guests just as much as new carpets or sofas in the lobby.”

With a desire to improve customer service, reduce the risk of staff injuries, and boost turnaround times, Askew committed to re-thinking the property’s storage areas.

A Surprising Realization: Shelves Can Move

Like many general managers, Askew originally thought the property’s shelving and racking had to remain stationary (had to stay in one place) because that’s all he’d ever seen. But he had used Spacesaver compact file storage systems in the past, and he wondered if the concept could be applied to heavier items like tables, tableware, and boxes of cleaning solutions. When his architect showed him a video of the ActivRAC® system in use, he instantly knew it would be a game-changer for him and his staff.

He knew that the aisles between the pallet racks were empty most of the time. He also knew he could put that empty space to good use. By installing the property’s existing shelving units and pallet racking on carriages that move along rails installed in the floor, a compact storage system could be created that would eliminate wasted space in the aisles. The staff could easily open dynamic aisles at the point of need, making retrieval fast and efficient.

Tips from a Top Resort Manager 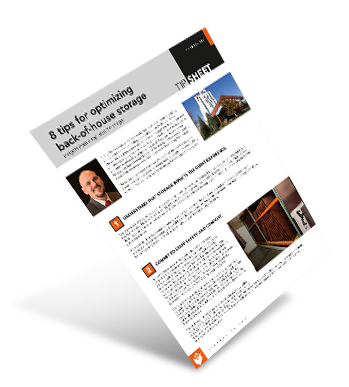 Wanting to learn more about the ActivRAC system, Askew contacted the Seattle-based Spacesaver affiliate. The affiliate sent a design consultant to the property to assess the space and discuss options with Askew and other decision-makers. They quickly decided that ActivRAC was the way to go, particularly when they learned that their existing racking and shelving could be mounted on the system.

Because a number of details must be considered when designing and installing a compact mobile storage system that moves on rails, Spacesaver’s design consultant visited the property several more times to gain a thorough understanding of the existing space and the items to be stored. For instance, the building was constructed with post-tension framing and a poured concrete floor, so the ActivRAC’s rail system had to be designed to avoid the cables installed in the floor. Other architectural and design considerations included the room’s odd triangular shape, the location of various support columns, the sprinkler system

The nearby Spacesaver consultant worked with resort management and the project architect to develop detailed storage plans. Before placing the final order, the Spacesaver consultant visited one last time to be certain that the measurements and plans were correct. “I remember him climbing up on our existing racks to be sure he had accurate measurements,” Askew said. “And it wasn’t just throwing a tape. It was ‘Hey, I need to put a laser up here, I need to move a few boxes.’ It was quite the jungle gym accomplishment and when we got the drawings back we could see it would fit perfectly.”

Adding to the project’s complexity was the fact that an internal wall needed to be moved to create a new workspace in an adjacent room. This was no problem for the Spacesaver team — they worked with the architect and the internal construction crew to make sure their efforts were coordinated. The new walls went up as the ActivRAC installation team came in behind them with the rails.

The property saw the following benefits

The property has grown rapidly over the past few years, and Askew and his staff have had to figure out how to store more items in the same amount of space. ActivRAC systems have allowed them to save space while still ensuring staff safety.

Staff can almost instantly retrieve necessary items – even large and heavy items like tables. They no longer have to move several bins or tables to get to the one they need.

Staff are able to focus on their mission, rather than struggling with inconvenient storage.

Frees up space for other uses.

The first ActivRAC installation freed up enough storage space that the property was able to purchase serpentine tables and other items that enhance the guest experience as well as the property’s revenue stream. Winning Over the Staff

“I have to say, our team was skeptical at first,” Askew said, referring to the staff’s reaction to the news that an ActivRAC system would be installed to move their existing pallet racks along rails in the floor. They were concerned that those pallet racks, when loaded with tables, cleaning supplies, and other heavy items, would be difficult or impossible to move. “It wasn’t something the team had seen before, and change in general is a scary thing. We were talking about coming in and taking out everything that they knew and replacing it with something completely and totally alien to them.”

But the staff immediately realized that the system’s mechanical assist handles allowed them to move thousands of pounds with minimal effort. The system also removed the time-consuming and potentially dangerous situations posed by stacking bins and tables on top of each other.

The Spacesaver consultant also worked with the staff to optimize storage on the mobile racking. He and the installation team removed shelves in some areas to accommodate large tables, and they added shelves in other areas for cleaning supplies and other smaller items. They installed hanging rods so staff could hang freshly pressed table linens, as well as protective rails to keep tables from falling off the shelves. When everything was in place, team leaders photographed the well-organized shelving areas and posted the photos near the ActivRAC handles to demonstrate which items should go where. The system is fully configurable, so staff can rearrange shelving as their needs change over time.

Askew said the staff was quickly won over. “The ease of movement is fantastic for them. When we’re setting up a room for an event, we need so many different parts and pieces. If a client changes their need, we’re able to accommodate that need at a moment’s notice. The fact that it moves so quickly, and the fact that it helps with organization — you don’t have to hunt for things, it’s at your fingertips when you need it — that’s the best part.”

It worked so well — and the staff liked it so much — that he installed another. And another. Plans are in the works to add a second tower at the property, so now even more ActivRAC projects are on the drawing board.

“When we’re setting up a room for an event, we need so many different parts and pieces. If a client changes their need, we’re able to accommodate that need at a moment’s notice. The fact that it moves so quickly, and the fact that it helps with organization — that’s the best part.”

“This system is a unique solution to an age-old problem.”

While decision-makers at the property appreciated ActivRAC’s configurability, they also liked the fact that the entire system, rails and all, could be pulled up and used in a different location if necessary. They have remained in close contact with their nearby Spacesaver affiliate to ensure that they understand all the options and possibilities available to them as the property grows. 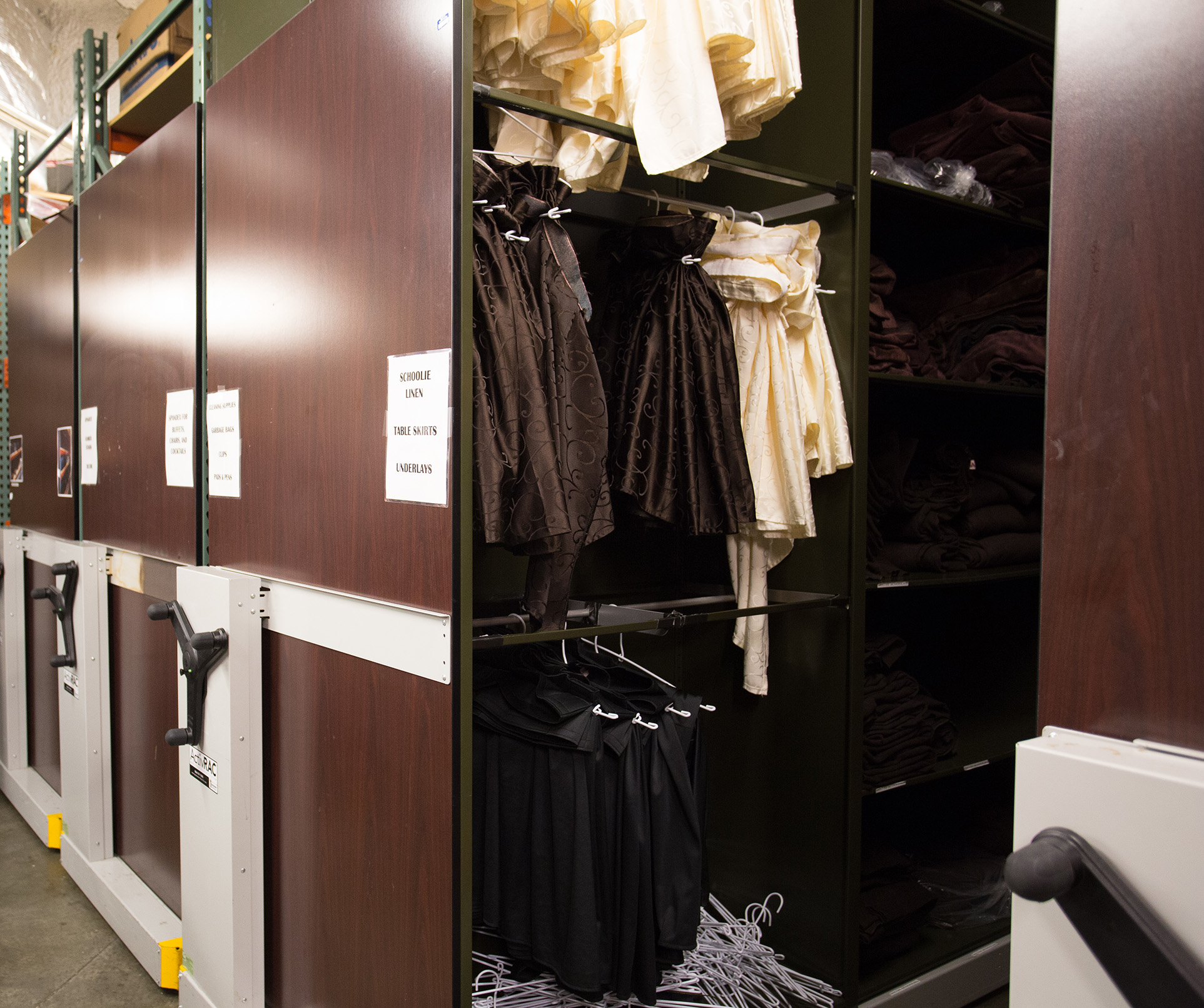 “It’s an ever-changing industry, and for us it’s an ever-changing property,” Askew said. “We have renovation plans, growth plans, and we needed something that was the be-all, end-all of multiple use systems.” When the second tower is built, the current storage area will become office space. He is planning to pull up the ActivRAC tracks and carriages and re-use them in the new building. They are also considering a larger ActivRAC system for slot machine maintenance and repair, and another for pick stations for housekeeping carts.

Askew says he has been pleased with Spacesaver’s ongoing help in all phases of every project, from collaborating on ideas early in the design process, through product installation, to ongoing maintenance and help with new projects. It’s a cycle that he thinks will keep repeating. “For us to get more storage into play, ActivRAC is the way to go,” he said.

Your business doesn’t stand still, and neither should your shelving. A well-designed, high-quality compact storage system saves time, money, and space — while improving employee safety and the guest experience.