When Illinois Governor Pat Quinn joined state and local officials to formally open the new State Police Metro-East Forensic Science Laboratory in Belleville, Illinois, in August 2014, it was certainly a cause for celebration. The 64,000 square foot, $41 million laboratory was a much-needed facility for the 360 law enforcement agencies in the southern part of the state, and included equipment for crime scene services, trace chemistry, DNA testing, polygraph, and latent prints.

Prior to the new building, the Illinois State Police had been leasing office space for its laboratory, and the rented space just wasn’t able to accommodate the growth of the agency in regards to technological advances. And, with 1.2 million people residing in 28 counties in the region, there was a significant increase in cases—and by extension, staff.

Land for the building was purchased from nearby a nearby university, and with all of the highly technical equipment, staff members, and evidence samples sent in and sent out of the facility on a daily basis, staff already recognized that crime lab storage space would be in short supply. Bradford Systems, the Spacesaver authorized distributor located in Southern Illinois, conducted a space assessment to see where the facility could maximize their space.

There were many areas of concern to the agency, but the largest one was the safe and compact storage of the hundreds of weapons either waiting to be tested or waiting to be sent back to a particular department. Long guns and pistols of various shapes and sizes were cycling through the Firearms Unit of the lab on a daily basis, and there needed to be a way to keep those organized in tandem with the agency’s tracking system.

“The 64,000 square foot, $41 million laboratory was a much-needed facility for the 360 law enforcement agencies in the southern part of the state, and included equipment for crime scene services, trace chemistry, DNA testing, polygraph, and latent prints.” At first, Rogers had suggested straightforward pistol and weapons racks—until he saw that it was important for the lab technicians to be able to reconfigure the storage solution based on the types of weapons were being stored at any given time. To compact the gun storage into a smaller footprint while still offering fully configurable storage, Rogers recommended a high-density mobile shelving unit with modular weapon rack.

As the modular weapon rack was already designed for law enforcement applications, it made perfect sense for crime lab storage of weapons. The rugged, modular steel frame was easily modified with a combination of specialized accessories. In the case of the IL Metro East Crime Lab, adjustable cantilever shelves, pistol hooks and brackets, and a sturdy base shelf with stock cups meant that weapons were safe, secure, and organized. And, if there happened to be an influx of additional long guns or pistols at any given moment in time, all of the components were fully adjustable and able to be moved easily based on storage needs. 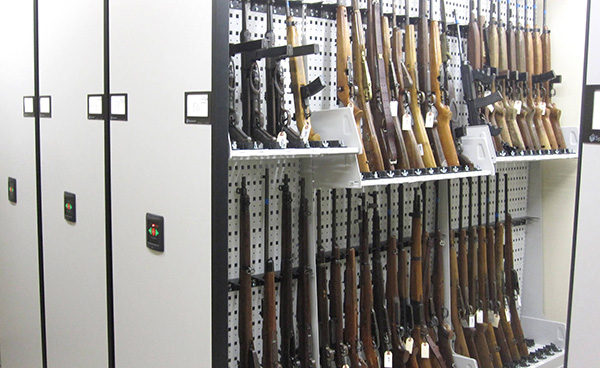 In addition to the compact storage system for weapons storage, mobile shelving systems were also implemented for long-term evidence storage and records storage. The new crime lab storage solutions will help to meet the infrastructure needs of the forensic science agency, and will ultimately, serve the most important people—the victims of crime and their families—in achieving justice.