A new library for a new university

A new library for a new university

Mount Royal University in Calgary, Alberta, has undergone big changes since its founding in 1910. Originally a junior college, the institution later became a community college and officially earned its designation as a university in 2009. This new designation reflected expanded degree program offerings and higher expectations for undergraduate and faculty research.

But there was a hitch: the institution’s library had been built in the early 1970s and it did not support these new expectations. “At the time it was built, we were a community college, a much smaller institution with different users,” said Alice Swabey, a professor and subject librarian at Mount Royal University who was instrumental in the new library’s design. She added that the 70s-era library consisted of a single large room that took up nearly an entire floor of the main campus building. As Mount Royal grew, the library became overcrowded with students and books.

The institution underwent an accreditation process as it transitioned into its designation as a university. The library was given a rating of ‘woefully inadequate,’ which actually helped the library’s advocates acquire funding for a new and improved library.

Do you need to make more room for students? See how Mount Royal University designed and planned a new library with students as the main focus. -Alice Swabey, a professor and subject librarian at Mount Royal University who was instrumental in the new library’s design.

Studying students: How do undergraduates use the library?

As part of the planning and design effort for the new library, Swabey and a colleague conducted a study to observe how undergraduate students use academic libraries. They spent hundreds of hours observing students and distributing and analyzing surveys. “It gave us a sense of the types of spaces that are important for students to be able to do their work,” Swabey said. “We could see areas that were busier than other areas. We found that many students come to the library for at least two hours per day, and some students spend up to four or more hours per day. So they need variety. They need comfort. They need to feel like it’s their own safe place to be. And they want to have inspiring spaces.” The design team wanted the stacks to be visually appealing to encourage browsing and contribute to the building’s bright, airy design. Spacesaver’s illuminated library shelving provided the perfect solution. The university’s archives and special collections are housed in a secure, climate-controlled area on the library’s top floor. The archives area makes efficient use of space with a Spacesaver mechanical-assist compact storage system, in which shelving moves on rails.

The university’s music collection is stored on shelving and in pull-out browsing bins, providing a convenient way for students and faculty to find CDs and other materials. As for the physical collections, members of the planning team were determined to keep the entire collection in the library and display materials in a way that would encourage browsing. “Our goal was to be able to house our materials in a way that would make students want to borrow them and be able to borrow them,” Swabey said. “We’re an undergraduate university, and we know undergraduate students don’t want to wait around for an item to come out of storage. So we were very committed to having everything available.”

“We were very committed to having everything available.”

Another consideration was the fact that libraries are rapidly evolving, and no one really knows what the future holds. “We wanted to be open to the fact that universities change,” Swabey said. “The needs of students change, and the needs of faculty change. So that was another guiding principle.” Static shelving can be relocated or mounted on compact mobile systems at a later date, giving the library space added flexibility.

Spacesaver’s illuminated shelving enhances the building’s light-filled aesthetic. The shelves are designed to conceal wiring, resulting in a clean, bright look that makes it easy for students to browse and borrow books and other materials. While student needs were important to the planning team, the needs of faculty were considered as well. “It’s not just a library for students,” Swabey said. “We have other campus services in the building, and those services have their own space requirements.” In addition to high-tech spaces like a large-scale visualization wall, a black-box immersion environment, and well-equipped presentation practice rooms, the new building features a pedagogic institute and an academic development center for faculty use.

The most common remark that I’ve heard from my faculty colleagues is, ‘I feel like I work at a real university now.’

The building was designed with an eye toward change and future growth. “Each floor of the building was planned so that it could bear the load of book stacks even though we don’t have book stacks all the way up,” Swabey said. “Our stacks don’t really begin in earnest until the third floor. But we want to be prepared for growth in the future.”

The end result is a library with varied settings to serve a range of needs. “A lot of people come to libraries so that they can get away from the rest of their life and think,” Swabey said. “And at the same time they want to know that they’re part of something larger than themselves. And I think that a library does that. We’re all here for similar purposes, but we also need different settings to do our work. So we try to provide as much variety as we can.” 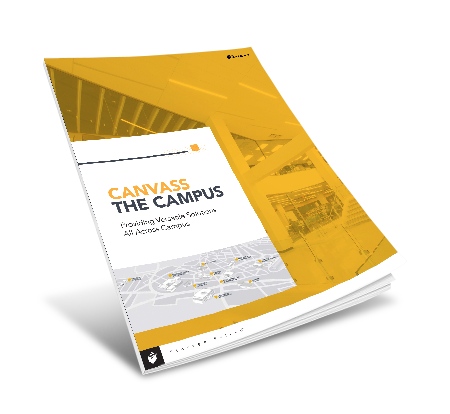 Universities are like small cities, with a variety of facilities from libraries and sports arenas to police departments and hospitals. That’s why campus space management is so important, download our guide for more information and ideas.