With increases in personnel and equipment, it’s no wonder that law enforcement agencies are running out of space in the one area that’s a “home away from home” for officers—police locker rooms. How do you design a locker room for growth when you don’t have an expanded footprint to work with? We give you three ideas to create space in your police locker rooms.

Retrofitting locker benches
At a department in Central Wisconsin, the police locker rooms were the place officers kept all of their equipment—including their body armor. The officers were used to hanging their armor on standard clothes hangers inside the lockers, even though they knew it wasn’t the best way to store this expensive and valuable equipment, as many body armor companies stress the importance of storing body armor flat. When stored on regular garment hangers, the ballistic panels of the armor can bunch up and create folds, and also allow the plastic straps of the vest to stretch beyond their memory point.

In taking a closer look at the department’s existing lockers, it was determined that bench drawers—with a pullout tray for storing body armor—could be retrofit into the existing lockers at the fraction of the cost it would take to outfit both locker rooms with completely new lockers. The tray also allowed the officers to dry the vests out after a long shift, and the drawers had extra room at the bottom, which meant additional storage space for boots and shoes, which also lacked a place in the old lockers.

Consider tiered locker options
Florida’s City of Sunrise started to revamp their facility, and one goal was just a bit more important than the others—a gym that could be utilized by all of Sunrise’s personnel. The department was moving from several separate locations to one central location, which meant a substantial storage locker quantity would be needed—and certain ranks of personnel would need a larger locker than others.

To create a way for the department to increase the number of lockers in the same footprint and still retain the room’s ADA clearances, several banks of double-tier lockers were created, with benches that extended across each row of locker drawers. These two-tier lockers created enough space to give the appropriate senior personnel full-length lockers without having to completely restructure the space.

Rethinking the bench
When the East Mesa Reentry Facility in San Diego, California was struggling with an increase in personnel, they also had to deal with the fact that there wouldn’t be extra space in the police locker rooms to accommodate the increase. In addition to increasing the number of lockers, they also needed to increase the width of each locker—eating up the space that had been available for freestanding bench seating.

With a bit of creative thinking from our engineering department, we worked with the Center to create a breadboard bench that could retract into the locker. After several tests for weight loads and other improvements, the benches were installed in East Mesa’s locker rooms. The bench reduced the depth of each locker by 12″, allowing the facility to fit the needed number of lockers into the same footprint.

The right locker solution has a direct impact on the quality of police locker rooms. Learn more about your options by downloading Personal Storage Locker Guide by clicking the icon below. 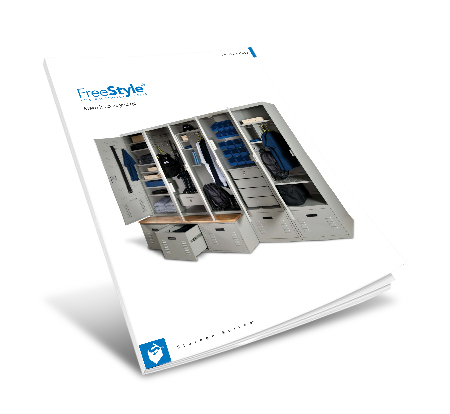