Spacesaver helps maximize every inch of space in an historic building.

T he Chemical Heritage Foundation, headquartered in Philadelphia, PA, is part museum, part library, and part research and outreach facility. The foundation is dedicated to preserving the history of modern scientific discoveries from the past 200 years and ultimately sharing these “unique, unpublished materials” with researchers and the public.

“It’s both a passion and an understanding that science is an important part of modern history,” said Carsten Reinhardt, President and CEO of the Chemical Heritage Foundation (CHF). This outlook fuels his organization’s efforts to preserve materials and documents related to the scientific process.

The Chemical Heritage Foundation needed to convert a boarded-up building into an archive. But the building could not be torn down or expanded because of its historical significance. The tall, narrow structure needed a substantial transformation.

Preserving ‘the path to discovery’

“We have a policy that defines the scope of our collections,” said Patrick Shea, Chief Curator of Archives and Manuscripts. “We don’t want to overlap collections and have no desire to preserve material that is already preserved somewhere else.”

The collection contains work from many noteworthy scientists, from Dr. Daniel W. Fox, a polymer chemist from GE Plastics, to Joseph Labovsky who worked to develop nylon.

Collecting materials related to the process –how someone made it from the beginning concepts to their breakthrough scientific moment — is the driving force behind the collection at CHF.

“The path to discovery is the main issue that we are seeking,” said Shea.

An example of this type of documented material would be the collection of Paul Lauterbur’s papers. He won the Nobel Prize in 2003 for the creation of the MRI. His papers contain the details and notes associated with his creative process, and those hidden gems, those insights into the scientific mind and process, is what CHF is aiming to preserve.

“One of the more interesting items in this collection is a 79 cent spiral notebook, in which on three pages he wrote out his initial idea for the creation of the MRI,” said Shea, “And that was used to apply for a patent label later on.”

When Shea came to CHF as the Chief Curator of Archives and Manuscripts, the organization of the collection was in pretty rough shape and there was a large backlog of materials that did not have proper placement within their existing archive storage facilities.

His goal was to better organize the existing collection and then make it more accessible to researchers and patrons. This was a challenge for a number of reasons, one being that because the collection was already at capacity in their current space, any new acquisitions had to be shipped off-site to an environmentally controlled vault storage facility in Delaware. “We are here to preserve scientists’ legacies, and scientists think of their legacy as their published papers. It’s my job to tell them that scholars are interested in more than that. They want to know about the wrong turns you took, the false starts.”

After Chemical Heritage Foundation’s building (which was built in 1865) went through a massive renovation in 2008, there was no more space to build additional archive storage.

“We don’t have open shelves for people to come and just browse through,” said Ronald Brashear, Othmer Library Director.

“We have to have the kind of products that allow us quick and easy access, because we have to come down and pick things off the shelves in a relatively short amount of time. Researchers would stop using us if it took hours for us to get the materials that they need.”

The vault in Delaware created a 2-day turnaround for obtaining archive materials. The off-site warehouse also charged a monthly fee. It soon became clear that CHF needed to bring their collection back on-site in order to better serve their fellows, researchers and even staff. 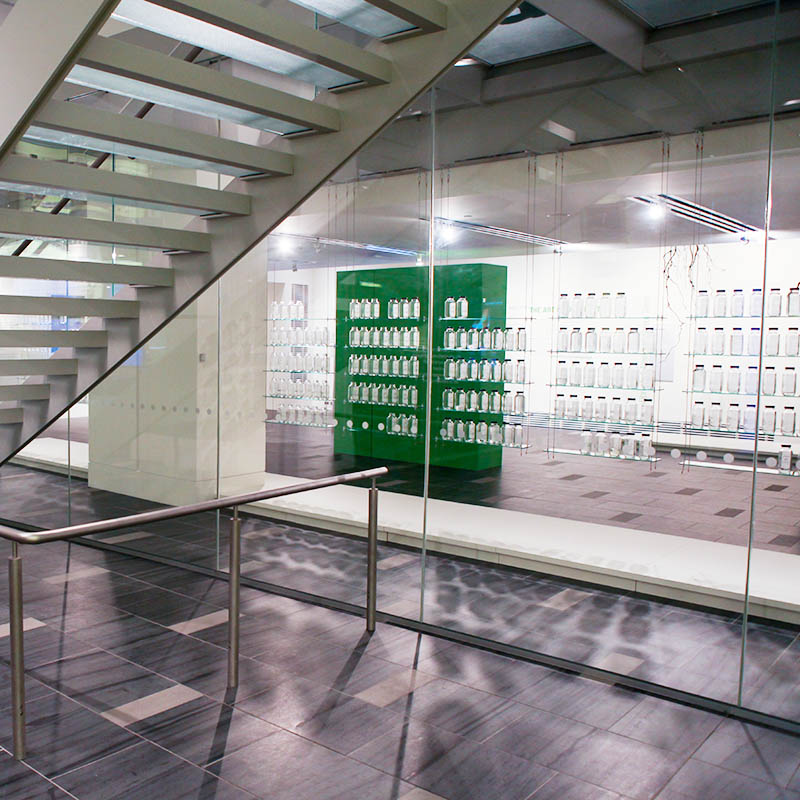 “On the one hand it was condemned by the city as being structurally unsound, but it was also deemed a contributing historical component of the neighborhood,” said Ed Barnhart, the architect who worked on the project.

They started the design process by completing a site survey to assess the stability of the historic building’s structure and found that the façade was in danger of peeling away from the interior structure. The row house that used to reside next door to the building had been removed, causing the whole building to shift.

At first, the architect investigated using individual floors in the building (4 floors originally) but once he accounted for an elevator and two egress stairways, there was no real useable space left to store the archives.

“When looking at the plans for creating a facility in there, we realized that we didn’t need the interior floors, and  could build the shelves straight up,” said Shea.

“And that’s when we reached out to Spacesaver,” said Barnhart, “Because they have this pretty amazing high-bay system, both a fixed version and a mobile version.”

Staff wanted more convenient archival storage, so they restored an historic building near the main facility.

The building’s exterior could not be significantly changed, but planners realized they could remove the interior floors and build high-bay shelving.

CHF looked at a variety of scenarios using both the static and mobile versions of Spcacesaver’s High-Bay shelving, taking into consideration how much material they could store using each.

They ultimately installed a 36 feet tall XTend® Mobile High-Bay system, with one moveable range between two fixed units. This system enabled them to achieve the storage capacity required of the archive facility, providing approximately 8,400 linear feet of shelf space to house new collections.

The new facility is state-of-the-art in terms of environmental controls and fire protection, designed to protect material and preserve the material and can accommodate another 20 years of collections acquisition.

Would you like to print or share this information — and learn more about this project? Please download a PDF using the link below to see more photos and diagrams.