A small goal of not wanting officers to go home in uniform had a big impact on the culture at Pennsylvania’s Salisbury Police Department.

When the Salisbury Township Police Department had the opportunity to renovate their building a few years ago, they found themselves in a position coveted by many in their shoes—the department was able to sit down as a whole and make a list of “wants and needs” for their new facility.

Salisbury’s jurisdiction spanned just over eleven square miles, but with a population of just under 14,000 people and a shared border with Allentown, the third-largest municipality in Pennsylvania, there was no shortage of police activity. They had simply outgrown their old building, and by putting on two additions and a completely new second floor, they had a chance to make the space a better one for staff and visitors to the building alike.

The earliest history of Salisbury Township begins with a mammoth molar found in White Horse, and the footprints of a small dinosaur found in a rock at Spring Garden. Within that list of wants and needs, one of the areas that got the most attention was the locker room. “One of the things we all came to a consensus on is that we really needed a comfortable, spacious locker room that everyone in the building could use,” says Salisbury Chief of Police Allen Stiles. “It’s a tough job that these officers have to do, and it’s difficult to come into an beat up building and not have a place to change clothes or shower and then going home the same way you came in. We wanted to make our officers feel a lot more comfortable.”

Stiles relayed his hope for the locker room to Darren Phillips, an Account Representative for Diversified Storage Solutions (DSSI), the Spacesaver authorized distributor in the area. Phillips immediately knew that while having a renovated locker room space would certainly help the officers’ comfort level, what would really help would be having configurable police gear lockers that each officer could configure themselves based on what they needed. Phillips also knew that locker needed to hold a variety of items, from uniforms and ballistic vests to off/on-duty weapons, civilian clothes, and personal items.

Working alongside the architect and the police staff planning the renovation, Phillips designed a locker room that would make the best use of available space. 25 FreeStyle Personal Storage lockers with double doors and bench drawers were installed, each equipped with horizontal drying racks for the officers’ ballistic vest to dry them after a day in the field, fitted trays for boots and shoes in the locker’s bottom drawer, and an integrated electrical system with outlets in each locker for charging individual phone, tablets, and radios.

“It’s a tough job that these officers have to do, and it’s difficult to come into an beat up building and not have a place to change clothes or shower and then going home the same way you came in. We wanted to make our officers feel a lot more comfortable.” 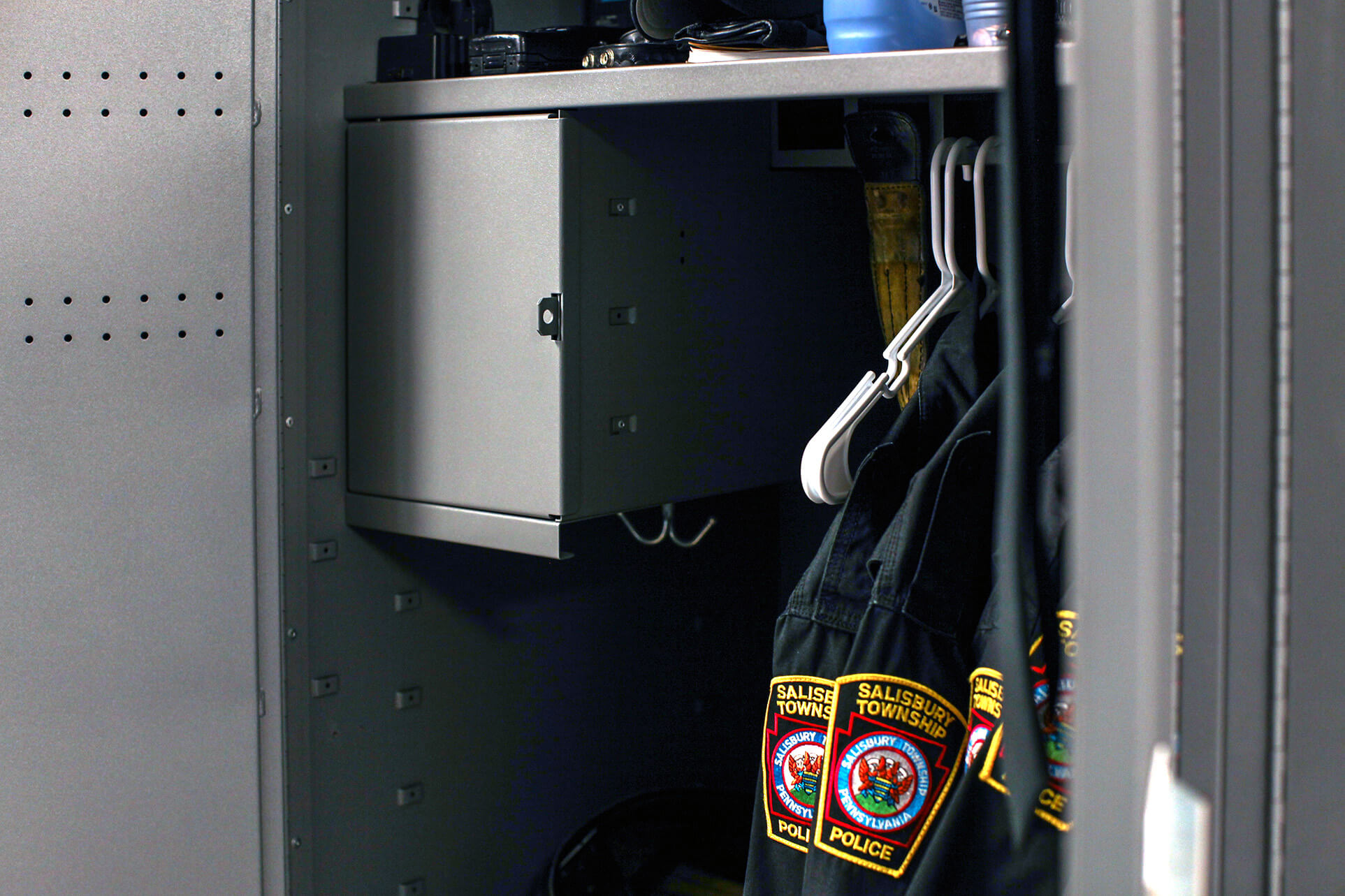 Population of Salisbury Township. The township spans an area of just over eleven square miles and borders Allentown, the third-largest municipality in the commonwealth of Pennsylvania.

As one of the main concerns of Stiles and his officers was to be able to have a secure place to store off-duty and on-duty weapons, a locked compartment was also configured into each one of the lockers, in addition to multiple hooks for hanging belts, uniforms, and civilian clothes when not in use. For Stiles, being able to offer his department a place to store both gear and civilian clothing in the same configurable police gear locker was something that meant a great deal.

“I can’t tell you how much of a difference that small detail made,” he says. “The lockers make it so easy to come to work, be able to change, to shower at the end of your shift and go home in civilian clothes—it seems like such a minor thing, but it really made a difference to the officers.”

Another difference maker for Stiles was the involvement of DSSI and Spacesaver. “Spacesaver really designed that locker room for us, even down to the fine points,” he says. “The built-in benches to ensure the officers had a place to sit to change, encasement of the lockers so that gear couldn’t be placed on top and the locker room would keep clean—they helped us think of everything.”

A second service aspect Stiles appreciated was the fact that Spacesaver was more than willing to take on design changes. “Others that I spoke with just wanted to sell us lockers—they didn’t want to be part of a project and work with the architect,” he says. “As soon as I mentioned the project to Spacesaver, they made a site visit to the building for a space assessment, listened to our ideas, and made a lot of visits to us after the installation was complete to see if everything was working correctly.”

Armed with a configurable police gear locker he felt comfortable with, Stiles’ next step was to acquire an evidence handling system that would allow Salisbury to follow and accurately maintain their chain of custody—and attain state accreditation.

A bank of pass-thru evidence lockers in a variety of sizes was integrated into the workflow of the building, located in a hallway in close proximity to the door the officers come through after a shift. “Evidence can be placed in these lockers, and with the push of a button, it’s ready for the evidence technician,” Stiles says. A refrigerated evidence locker is located near the bottom of the lockers for medical kits and biological evidence that needs to be stored.

“Others that I spoke with just wanted to sell us lockers—they didn’t want to be part of a project and work with the architect,” he says. “As soon as I mentioned the project to Spacesaver, they made a site visit to the building for a space assessment, listened to our ideas, and made a lot of visits to us after the installation was complete to see if everything was working correctly.” Once the evidence is placed in short-term storage, the doors open up on the other side of the wall so the evidence technician can collect, package, and process the evidence for long-term storage. With the organization and best practices the evidence lockers afford, Salisbury’s accreditation process doesn’t seem so far way. “The system has allowed us to get one more mile down the road in terms of that process,” Stiles says.

As a result of the configurable police gear lockers and the new evidence handling system, Salisbury’s operations are more efficient and organized—but that’s not the biggest improvement. “There’s been a significant culture shift here,” Stiles says. “We’ve needed something like this.”

We’ve worked with countless departments like Salisbury to access storage needs. Download our Public Safety Lookbook to take a look at the many areas where compact storage can make a difference.

Contact us to see how your local Spacesaver consultant can help you create the right solution for your police department!
PRODUCTS
MARKETS
SPACESAVER
CONTACT