The Best of Both Worlds

When Chris Durbin set out to design a cutting-edge medical cannabis grow, he wanted to combine the best features of greenhouses and indoor cannabis grows. “My grandpa was a botanist and I grew up in greenhouses, learning from him,” Durbin said. “It was definitely hands-on and applied.”

Later, as he gained experience growing medical cannabis indoors, he came to appreciate the reliable and consistent product he could produce in the highly controlled environment of indoor grows.

He resolved that when the right opportunity came along, he would build an indoor grow that blended his knowledge of large-scale, indoor horticulture with the appreciation for natural processes that he gained in the greenhouse.

He got his chance when he teamed up with a friend to create Alpha Flora, an integrated grow and wholesale distributorship that grows and sells craft cannabis. With a commitment to quality, cleanliness, and sustainability, Alpha Flora exemplifies the art and science of boutique cannabis. The team acquired an 80-year-old building and set out to convert it to a modern cannabis grow. It wasn’t an easy task. “We designed around the building and did a lot of retrofitting,” Durbin said. “Our entire layout was design compromises.”

“This is the most competitive cannabis market in the world. There’s no margin for error.”

The facility build-out resulted in nine rooms, with eight rooms devoted to flowering and one devoted to mother plants and propagation. Space in all the rooms was tight, with about 12 feet in width, 40 feet in length, and varying ceiling heights.

Durbin knew he needed to maximize the facility’s grow area to produce the highest yields. He would be heating and cooling the rooms regardless of how many plants were growing in them, and he didn’t want to waste space. “This is the most competitive cannabis market in the world,” he said. “There’s no margin for error.”

Durbin had been seeking ways to make the most efficient use of available space throughout his career, and he planned to install rolling tables in the new facility. As he researched the best brands, he came across the concept of mobile vertical racking, or vertical farming.

He understood the potential right away: he could take the space-saving concept of rolling tables and multiply its effect by going vertical. After doing more research, he knew he wanted to invest in the best system on the market. “I wanted a vertical racking system and I wanted to grow on four levels, so I needed something really robust,” he said.

He got a quote from a manufacturer but felt uneasy about the product and the company’s commitment to customer service. He continued his research by talking to the firm’s clients around the state, and he soon realized the system wouldn’t be sufficient for his needs. He was concerned about durability and safety, so he kept looking. 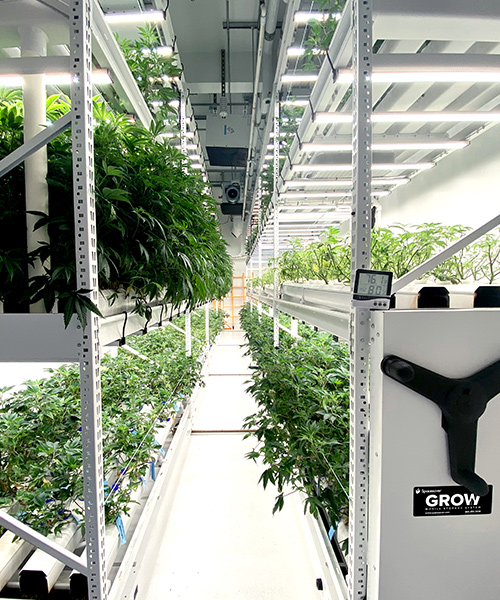 “The Spacesaver racks work very well, and they save a ton of space.”

An acquaintance recommended Spacesaver’s GROW Mobile System, and Durbin sought drawings and a quote from the cannabis consultant at Spacesaver’s Tualatin-based distributorship. He liked the fact that the distributorship was close by, with a dedicated sales and support team and factory-certified technicians always at the ready.

“I did my own homework, and I felt good about the relationship I had with the Spacesaver consultant,” Durbin said. “Even though Spacesaver’s quote was higher, we decided it would be the smartest investment.”

“Even though Spacesaver’s quote was higher, we decided it would be the smartest investment.”

The Spacesaver installation team installed the GROW Mobile System in two rooms as a trial. They trained staff on its use and Durbin incorporated lighting, irrigation, and custom inserts that he commissioned from a local fabrication shop.

Without revealing his trade secrets, Durbin said the Spacesaver GROW system integrates perfectly with his unique approach to growing medical cannabis. “It’s a very intense cultivation style, with high plant density,” he said. “We have four levels and we’re using every inch.”

After the successful trial run, Durbin ordered more Spacesaver vertical farming systems for the rest of the medical cannabis grow. He said he and his team are pleased with the system’s strength, ease of use and reliability. “The Spacesaver racks work very well, and they save a ton of space,” he said. Durbin collaborated with a local fabrication shop to create custom inserts for the Spacesaver system.

Learn More About Our

Talk with our experts and get a virtual GROW Mobile System product presentation.

Sign up for the upcoming webinar on Tuesday, March 22.

When you’re ready to take your cannabis grow to the next level, contact us to get started on optimized layouts and other design plans. With distributors in major cities across North America, we have knowledgeable cannabis consultants and factory-certified service crews near you.