When a new jail expansion became a reality for North Carolina’s Guilford County Detention Center, focus was given to space for inmates as well as space for their property and issued clothing storage.

O vercrowded and dangerous were two words that were synonymous with the old Guilford County Jail in Greensboro, North Carolina. A third of the jail’s inmates were sleeping on the floor, and the building was so over capacity that inmates were sent to the jail in High Point, a half hour away, in order to balance things out. In addition to the unsafe condition for inmates, corrections officers and staff weren’t able to work in safe conditions, resulting in low morale and a host of other risk factors.

Realizing that conditions had to improve immediately for staff and inmates alike, a new jail expansion was approved with a $115 million voter-approved bond. The planned eight-story, 400,000 square foot Guilford County Detention Center would include jail administration space, intake areas, kitchen, laundry, and would have an inmate housing capacity of over 1,000 beds. 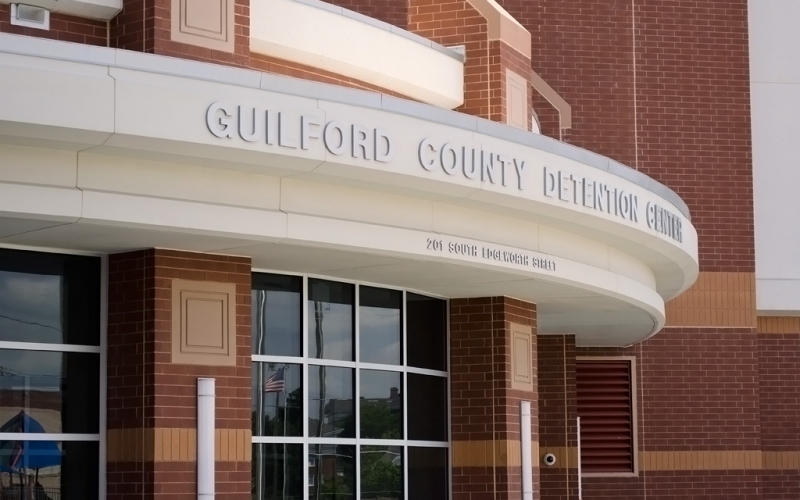 The new detention center would certainly help alleviate a countywide jail-system overcrowding problem, but space for inmates was just part of the issue that needed to be addressed with the new building—evidence, inmate clothing storage, and medical records were just a few of the many departments that had inadequate space to effectively perform their duties. Even with the sizeable increase in square footage, it was essential that smart storage be integrated into the center from the very beginning, as the jail planning committee and architect knew how quickly space could get compromised.

Moseley Architects, the firm working on the project, had a strong working relationship with Patterson Pope, the authorized Spacesaver® distributor in the area, and brought them onto the project. Patterson Pope had completed other public safety installations in the area, including several with the Guilford County Sherriff’s Department, and as the planning process continued, it became apparent that there was no way to accommodate all of the detention center’s inmate property storage needs without using high-density compact mobile shelving systems throughout the facility.

As the number of inmates was increasing in Guilford County even as the overcrowding issue was being addressed, special focus was given to inmate property storage and inmate clothing storage.

For the staff in the inmate property storage departments, it came down to two needs that were similarly important, the first being transaction time. With the average jail stay of an inmate being approximately six to 18 months, the inmates were constantly being shuffled in and out of the system. In addition to those stays, property inventory shifted every time an inmate had a court appearance, parole hearing, or a visitation, and staff had to record each one of those transactions separately. At the old facility, there wasn’t an organized way to account for all of the movement—and it resulted in slow transactions and a fair amount of wasted time for staff members.

Safety was also a major concern. The staff was hunting for, moving, and lifting heavy items on a regular basis. The risk of injury was high—and when a staff member was injured, there weren’t enough staff members to come in and help pick up the workload. Hearing those concerns, Spacesaver implemented a high-density mobile storage system to organize the inmate property storage in a way that made it easier on the limited personnel. The mechanical-assist control made it possible for staff to move thousands of pounds of property with a few turns of the wrist, and as the system featured dual entrances, it was possible for more than one staff member to work within the unit at one time. The four-post metal shelving installed within the system was specifically spaced out to accommodate over 1,600 of the large blue plastic totes the center was using for inmate property—which doubled the capacity that conventional static shelving would have provided.

The inmate clothing storage area had similar issues, particular when it came to the constant transactions of inmate uniforms, socks, and sandals. Staff needed immediate, organized access to the goods they were checking in and out on a daily basis, so two additional high-density mobile storage systems—one for male and one for female inmates—were installed to decrease transaction times.

The planning committee for Guilford’s new facility also recognized the need for enhanced evidence storage, particularly for short-term evidence collection and processing. It was important that the evidence storage solution allow evidence to be both deposited and retrieved from the same self-closing doors, and that the evidence could only be collected by authorized personnel. A bank of non-pass-thru evidence lockers made these two stipulations possible, and also ensured that the evidence processing room would not need to be altered in any way, as the locker bank was easily mounted to an existing wall.

Each officer also needed a key to the evidence locker unit, as there were times where they needed to be able to come and process evidence at a later time—for instance, in the event that an inmate situation would arise. Spacesaver worked with the evidence staff on a solution—a custom key drop built into a small locker in the upper left-hand corner of the system. With the key drop, an officer was able to place evidence in the locker, lock the unit, and drop the key in the drop, knowing that the chain of custody for the evidence was intact. $15 million: the amount the Guilford County Detention Center was under in budget when it formally opened to the public in May 2012.

“Being able to be involved in the project during the initial planning process gave us the opportunity to address space limitations prior to the construction. In many cases, we were able to significantly increase the building’s estimated storage capacity.”

Pharmaceutical services are an integral part of the health care that is provided in correction institutions and detention centers, and this was no exception at Guilford. Inmates spanned a wide range of ages and health conditions, and the pharmacy needed to keep up with hundreds of medications for short-term illness, chronic conditions, and mental health issues. A FrameWRX modular shelving unit with color-coded bins was introduced to organize supplies, leading to a better-executed system for getting the necessary medications to specific inmates.

Another need within the medical department of the facility was a new approach to medical records storage. The goal was to have an easier way to discern between active and inactive inmate records, and to compact both sets of records in a way that would allow staff to store more in less space. To assist with these needs, two high-density mobile storage systems—one for active and one for inactive—was installed to separate the records and help increase the efficiency of the staff by keeping them organized.

Several other areas of the detention center were able to increase their storage footprint. Heavy-duty wide span shelving was used in the warehouse area to store bulk supplies, and Spacesaver worked with the architecture firm to design and install the shelving around the large cement pillars that served as structural reinforcements within the building. And, another compact storage system benefitted the center’s Classification and Central Records unit, which is responsible for maintaining active and inactive inmate files as well as responding to public record and court requests regarding information contained in a particular inmate’s file. “Being able to be involved in the project during the initial planning process gave us the opportunity to address space limitations prior to the construction,” says Bobby Davis, Storage Specialist at Patterson Pope. “In many cases, we were able to significantly increase the building’s estimated storage capacity.” Due in part to that advanced planning, the Guilford County Detention Center opened on time and came in $15 million under budget—and more importantly, was able to plan for a larger prison population and eliminate the possibility of overcrowding the county had once faced.

Want to see how smart storage can lead to impoved morale, safe employees, and extra space that can be used for other areas? Download our Public Safety Brochure below.