Franklin Police Department wanted to achieve the highest LEED® certification in the state of Tennessee. Efficient storage helped them get there.

When Tennessee’s Franklin Police Department started planning a new headquarters in 2008, it didn’t take them long to realize they had been working at a significant storage disadvantage for years. The former police building was a 30,000 square foot space in the City Hall building. “We had so many areas of the headquarters that needed a serious space makeover—evidence, our locker rooms, records, weapons,” says Sgt. David Prather. However, there was a problem—they didn’t quite know where to begin. “Neither the general contractor nor we had any sort of expertise to effectively plan for storage throughout the building,” Prather says.

Admittedly, there was a lot to plan. Located 21 miles south of Nashville, Franklin’s population has increased more than fivefold since 1980. With a population of nearly 70,000 residents, it is the seventh-largest city in Tennessee—and the growth wasn’t slowing down. To accommodate for future growth, the city embarked on a 94,000 square foot building that would be placed inside the city’s historical district instead of a site on Franklin’s periphery. This served to reinforce the urban quality of the city’s downtown area as well as to further position the police force as an integral asset to the community.

The square footage of Franklin Police Department’s new public safety building. The facility accommodates the current needs of the police department, emergency operations, and traffic operations while also planning for the anticipated growth in staffing and service needs over the next 20 years.

“Our facility is now recognized as a model police headquarters. We never realized how important the storage components would be and what a difference a good system makes.”

At the same time, there was another goal of the new facility—to build in an environmentally responsible manner and serve as an example for the rest of the city. The city and its architecture firm were well aware that achieving LEED certification for would create a building where less energy and water were used, saving money for Franklin’s families, businesses, and taxpayers—and would create a better working environment for public safety staff, who were used to working in the cramped conditions of the former building.

Unaware of a logical first step, Franklin’s architecture firm, Kennon Architects, enlisted in the help of Patterson Pope, the Spacesaver authorized distributor in Tennessee. Patterson Pope’s Al Stewart conducted an initial space assessment and quickly identified several ways that organized and compact storage could assist with the department’s goals for the new building.

When it came to their locker rooms, Franklin’s primary goal was to create a pleasing environment where officers could get ready for their day—and at the same time, offer the staff police equipment lockers that would hold all of the items they needed to serve the community on a daily basis. Working with the architect for the building, Stewart also realized that the locker room and the police equipment lockers inside could actually contribute to the facility’s LEED certification with the help of a little engineering.

245 FreeStyle Personal Storage Lockers were installed with a custom lighting and ventilation system. Each bank of law enforcement lockers was equipped with top grates, which allowed an air duct to run across the top and into an exhaust system at the end of each row. The grates at the top of the police lockers were fully open furthest from the exhaust vent, and closed incrementally as they got closer to the vent. This air ventilation system provided a consistent airflow throughout the entire uniform storage locker to aid in drying officer gear as well as removing odors. The locker tops sloped away from the air ducts so that it was difficult to place additional equipment on top of the lockers and create a cluttered space.

The number of personal storage lockers needed by Franklin Police Department. In addition to being outfitted with a bench drawer, electrical outlet components, an interior lockable box, and hooks, the lockers were also engineered for HVAC integration and indirect lighting as part of the building’s LEED certification. 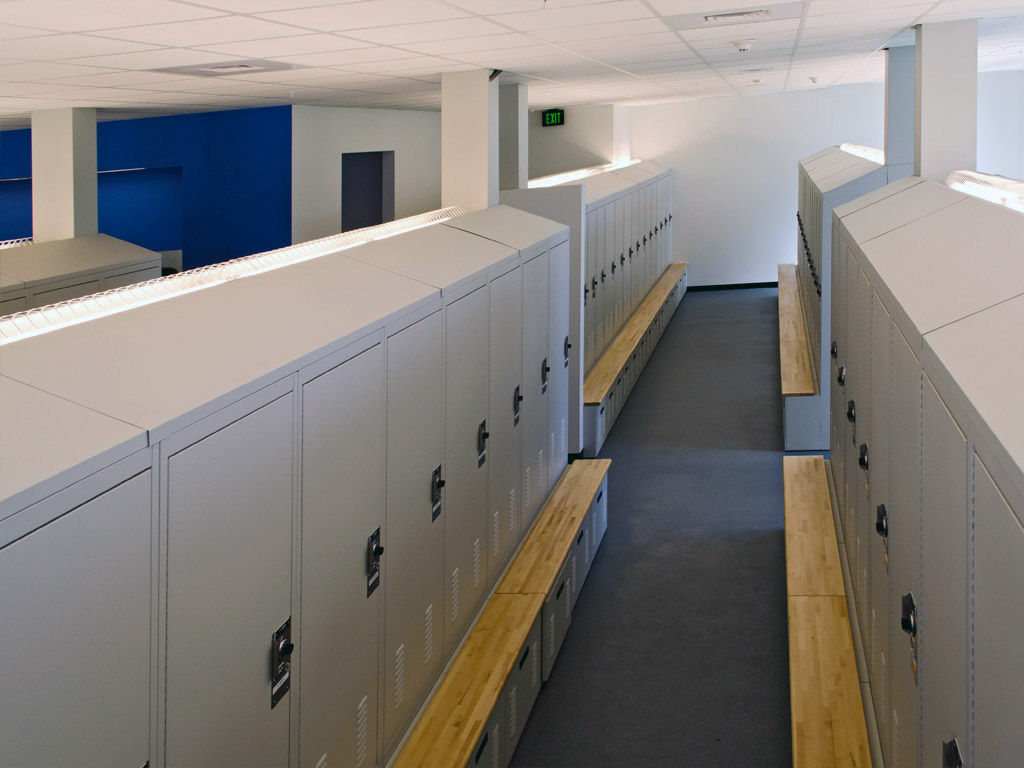 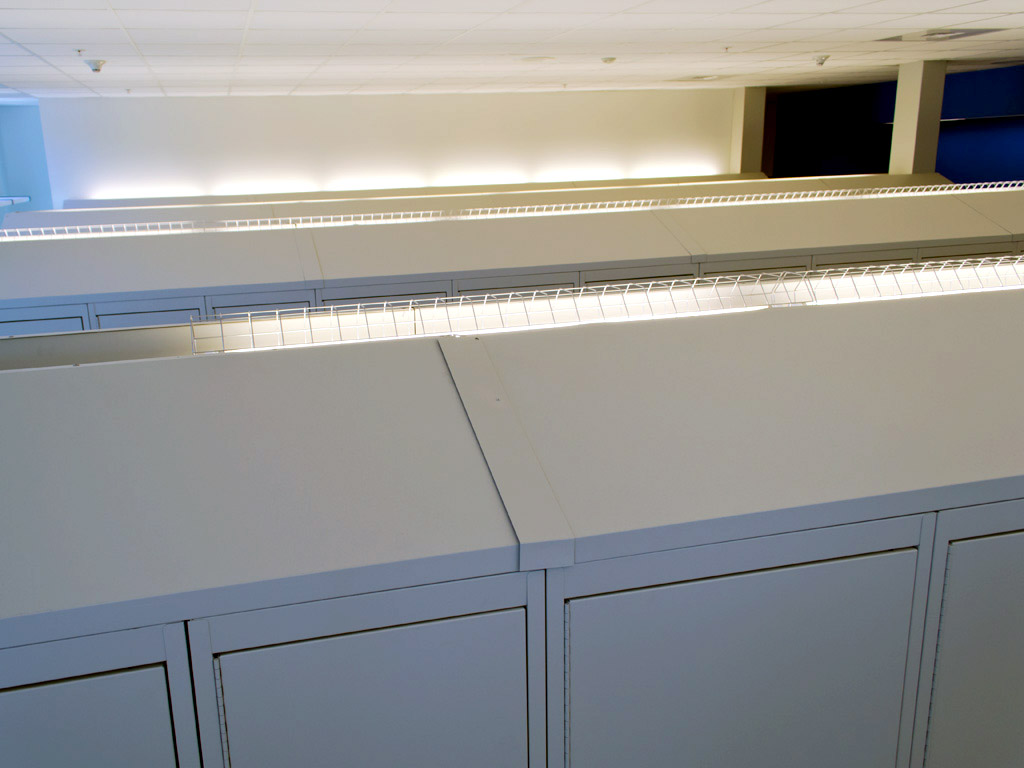 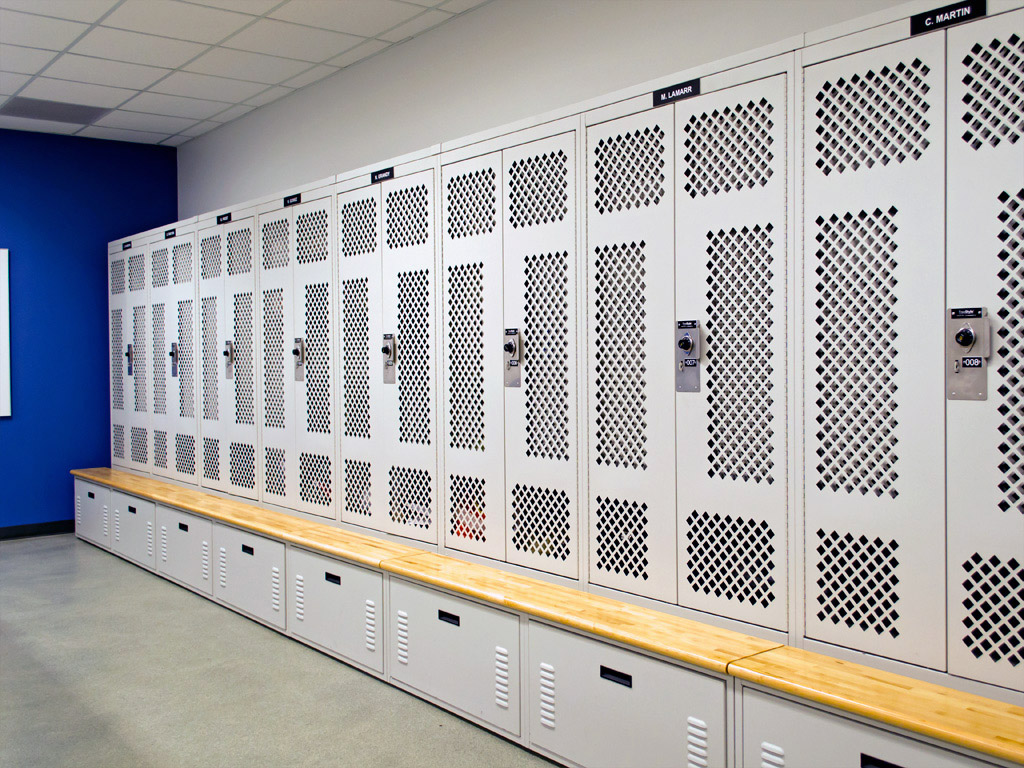 “We had so many areas of the headquarters that needed a serious space makeover—evidence, our locker rooms, records, weapons, but neither the general contractor nor we had any sort of expertise to effectively plan for storage throughout the building.”

The sloped tops of the lockers also served another purpose—the shortened depth allowed lighting fixture to be placed upside down on top of the locker’s air duct. This lighting was directed upwards for an indirect lighting effect. The indirect lighting increased the light quality of the locker rooms and played a part in the Indoor Environmental Quality category of Frankin’s LEED certification process.

Stewart also utilized the same personal storage lockers with a slightly different look and components in the Franklin’s SWAT Room. The department’s SWAT team was a combined effort with the nearby Greendale Police Department, and stored a variety of gear and weapons related to the tactical unit’s efforts. An additional 36 turnout gear lockers, this time with diamond perforated mesh doors for ventilation and visibility, were installed in this room with the goal of being able to see and access gear immediately and deploy the team as safely and quickly as possible.

In addition to the police equipment lockers, a variety of other storage solutions were used throughout Franklin’s headquarters. For the department’s long-term evidence storage, a powered compact mobile shelving system equipped with doors and drawers was installed to organize and store small items in a reduced footprint, and a manual mobile system was also installed in the Drug Room.

At Franklin’s old facility, a basic kitchen refrigerator was used to house biological and perishable evidence in the short term, and Sgt. Prather knew it certainly wasn’t helping the department keep a tight chain of custody. A bank of pass-thru evidence lockers in a variety of door sizes were installed, including a large refrigerated evidence lockers with compartments for medical kits and biological samples.

For weapons storage, flush-mounted pistol lockers and Universal Weapons Racks were used in five different areas throughout the facility to store rifles, long guns, pistols, and assault weapons. Stewart knew the adjustability of the UWR system would accommodate the weapons of various lengths and types, and the perforated doors and sides would simplify weapons inventory. As an added bonus, the guns could be stored assembled with optics and accessories if needed. At the same time, the UWR system would completely prevent the weapons from any accidental movement, vibration, and abrasion, providing another level of security.

The population of Franklin, Tennessee, which has increased more than fivefold since 1980. It is now the seveth-largest city in the state. 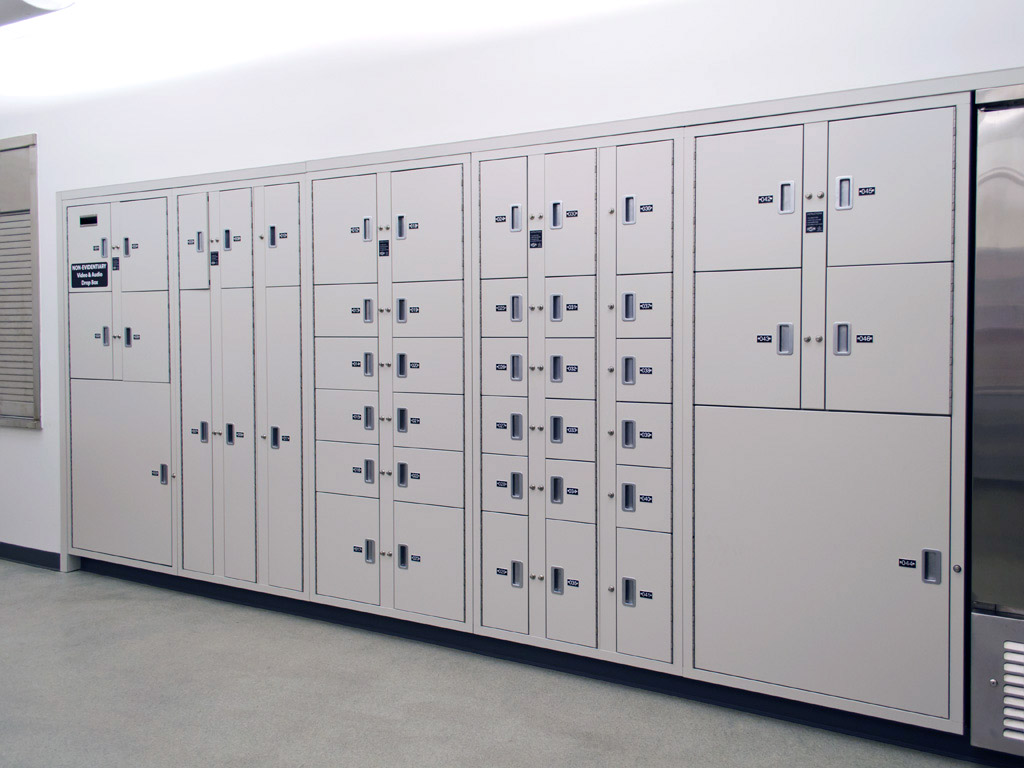 With the help of these innovative storage solutions, Franklin Police Department met their goals. The new facility has the necessary technology and security, and at the same time is open to the community by way of a public lobby and several meeting rooms and conference spaces. The police headquarters also received the LEED® certification they were seeking—the building is one of only 94 LEED® certified projects in the state of Tennessee and the first police facility to be LEED® certified.

“Our facility is now recognized as a model police headquarters, and Patterson Pope and Spacesaver had a lot to do with that,” says Sgt. Prather. “We never realized how important the storage components would be and what a difference a good system makes.”

Looking for a way that your police department can maximize space in all areas of your facility? Download our Public Safety Lookbook to take a look at the possibilities.