Thanks to an integrated storage solution for every aspect of their headquarters, the Skokie Police Department has increased efficiency, productivity, and morale.

Sixteen miles west of downtown Chicago is where you’ll find the village of Skokie, Illinois. Home to just under 65,000 people and over 2,300 businesses in its 10-mile radius, the village has been a fast-growing, extremely livable suburb, particularly for those who want to escape the hectic pace of city life while still remaining close to Chicago. In fact, it’s one of the village’s taglines—“Skokie: A Suburb That Feels Like a City”.

The amount of money two high-density mobile storage systems were able to save the Village of Skokie in new construction costs that would have been needed to accommodate fixed or static shelving systems. That fast growth hasn’t come without a few growing pains—especially in the case of Skokie’s Police Department. Although the department always earned high marks for service, doing so started to become increasingly difficult for a simple reason—the department was running out of space to do its mission effectively.

A building analysis showed that the department had outgrown the 27,000-square-foot space built in 1957, and it also revealed inadequate storage systems and systems to support a modern police force. Data systems and fire alarms didn’t meet current standards. Many of the areas within the facility didn’t comply with the Americans with Disabilities Act. Records storage, evidence processing, and other key functions of the department were inadequate, and traffic patterns in the building were a problem. All of these conditions, compounded, contributed to a lack of good employee morale.

When the Village of Skokie moved ahead with a plan to convert an abandoned 79,300-square-foot bottling plant into a state-of-the-art police headquarters, the decision-makers at the Skokie Police Department knew exactly what their most valuable asset was—the department’s people. “Employees truly appreciate it when you do what you can to make their jobs easier,” says now-retired Skokie Police Chief Barry Silverberg. “What it often boils down to in law enforcement is time savings and productivity. Both ultimately lead to higher morale—and a higher level of service to the community.”

With this in mind, Skokie Police Department brought together several different groups to create a “New Headquarters Team,” including police department leaders; user committees; SRBL Architects, the nearby Deerfield, Illinois firm that designed the building; and Bradford Systems, the local Spacesaver representative in the Chicago area. Together, the team analyzed the facility and budgetary goals, key functions within each office of law enforcement, and the role storage systems play in helping the department succeed in proactively and professionally delivering service to the village’s residents.

“Employees truly appreciate it when you do what you can to make their jobs easier. What it often boils down to in law enforcement is time savings and productivity. Both ultimately lead to higher morale—and a higher level of service to the community.”

“home base” for officers

For many police officers at Skokie and around the United States, a personal storage locker is “home base”—a place where you can keep your personal and professional items safe and secure. At the department’s old facility, not everyone was able to have a locker because of the limited number. More to the point, the lockers were designed for students—not law enforcement personnel. “The old lockers were way too narrow and only had a shelf and a couple of hooks,” Silverberg says.

“A properly designed locker goes a long way toward the creation of a positive working environment. The lockers have a huge impact on morale, and the attention to detail has paid off.” Based on criteria developed by the department’s locker committee, storage experts Bradford Systems designed a solution for the facility’s locker rooms, including 142 Spacesaver FreeStyle® Personal Storage Lockers. Each of the department’s two-foot-wide lockers includes a bench made out of hardwood that doubles as a drawer; double doors that open from the middle; adjustable, full-width shelves with a garment hanger for civilian clothes and uniforms; modular electrical components with duplex outlets for powering and charging electronic devices; notches on the inside of the doors for duty belt storage, and three-hook bracket assemblies on the interior of the locker for even more places to hang garments or accessories.

The many options and interchangeable features the lockers offer was crucial for Silverberg, who says there’s a lot more to personal storage locker to law enforcement than meets the eye. “A properly designed locker goes a long way toward the creation of a positive working environment,” he says. “The lockers have a huge impact on morale, and the attention to detail has paid off.”

When rapid response is the key

Skokie’s Tactical Intervention Unit (TIU)’s mission is to rapidly respond with specially trained and equipped personnel to special circumstances, such as hostage situations and barricaded subjects. Given the need to maintain a state of readiness, TIU team members must move quickly—and their gear much by organized and easily accessible. However, with the old lockers.

The number of usable, adjustable shelves on the system. 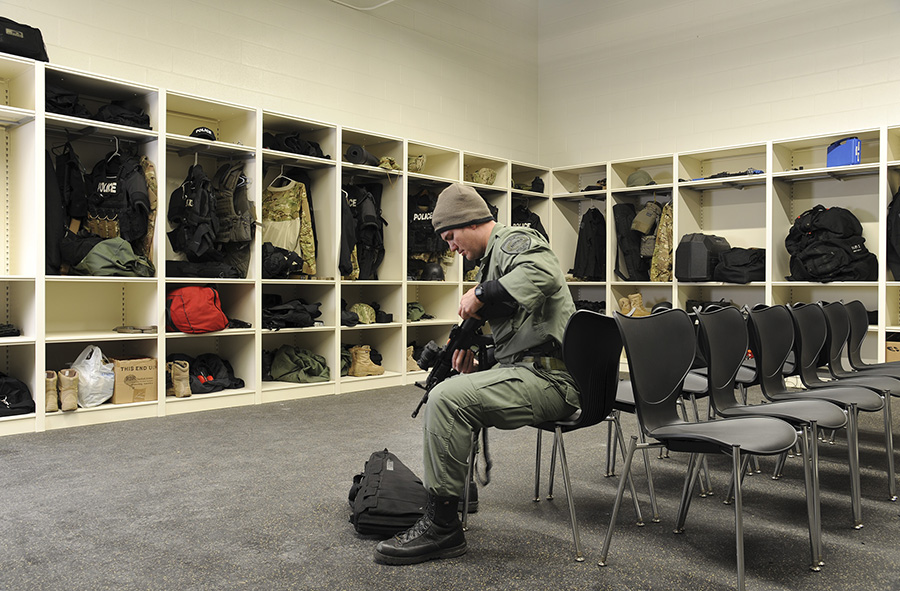 The department was simply thinking about lockers similar to the ones in the locker rooms, but Spacesaver had an idea. They engineered 23 large metal lockers out of heavy-duty four-post shelving—essentially creating large cubbies for each TIU team member. The storage system features shelves at a variety of heights and provide immediate access to helmets, weapons, radios, batteries, shields, gas masks, and additional gear. The lockers also include electrical outlets and heavy-duty garment hangers, which allow officers to hang fully loaded tactical vests, each of which can weigh around 130 pounds. “With the old lockers, the TIU officers couldn’t store loaded vests, because they wouldn’t fit,” Silverberg explains. “Now, they’re able to gear up much quicker.”

Readiness is also critical for patrol and community service officers. Seeing the corridor that connects the roll-call room with Skokie’s parking garage, Spacesaver planners lined the corridor with 47 additional lockers for gear bag storage. A gear bag contains everything from ticket books to extra ammunition, and can weigh up to 30 pounds. With the new lockers, officers are able to have them when out in the community, and lock them up inside the police department after each shift.

Read more about the TIU cubbies at Skokie Police Department

Securing the chain of custody in the short and long-term

Skokie Police Department employs a total of 23 evidence technicians—and evidence is processed 24 hours a day, seven days a week. At the old police station, the Property & Evidence Room consisted of a converted janitor’s closet, and space was so tight that technicians had to use the floor to package large pieces of evidence. Once the evidence was packaged, it was stored on static shelving and in standard lockers, which made space even tighter. Refrigerated evidence was kept in a refrigerator secured by a padlock.

Given the longer periods required for holding certain evidence, coupled with the need to protect the integrity of evidence throughout the entire chain of custody, the department knew they had to do something. “Maintaining the chain of custody is paramount in the prosecution of criminal cases,” Silverberg says. “We knew we wanted to go as high-tech as we could at the new facility for evidence storage.”

“With the old lockers, the TIU officers couldn’t store loaded vests, because they wouldn’t fit. Now, they’re able to gear up much quicker.” The department installed Spacesaver’s pass-thru evidence lockers, which are specifically designed for maintaining the chain of custody during the critical short-term evidence period. The lockers, designed to accommodate evidence of various sizes, are built into the wall that separates the evidence drop-off area from the Property & Evidence Room, and include four double-walled refrigerated components.

With these pass-thru lockers, an officer can deposit packaged and labeled evidence in one of the open lockers, then pushes a button to lock the door. At that point, no one can open it from that side, and the custody of the item passes definitively to the evidence technicians on the opposite side of the wall.

In addition to the short-term evidence storage, Skokie also gave their long-term evidence storage a makeover as well. As the Village of Skokie is home to one of the most popular malls in the Chicago area, the department was continually processing and storing large volumes of stolen merchandise—not to mention holding evidence for as long as 18 months, if not longer. A high-density mobile storage system was able to organize all of the department’s current long-term storage as well as help them plan for future needs. “The buzz in law enforcement these days is to do more with less,” Silverberg says, “and the mobile storage system lets us do exactly that. The mobile system, combined with the evidence lockers, allows us to tighten the chain of custody and do what we do much more efficiently than ever.” Even with the move to digitize documents, there’s still a need to retain hard documents—like police reports, arrest reports, and warrants—and this need was creating a significant organizational challenge for Skokie Police Department. To assist with this, another high-density mobile shelving system was installed in the department’s record storage area. Stationary carriages bookend the mobile carriages on the system, one of them is lockable to protect sensitive files. Both mobile systems at Skokie not only helped the department achieve optimal efficiency—they also contributed to the architect’s goal of designing an environmentally friendly facility with a small footprint. SRBL Architects estimates that the mobile storage systems saved 1,380 total square feet in the new facility. At the cost of $268 per square foot, that adds up to $369,840 the Village of Skokie was able to save in new construction costs by using mobile instead of static shelving. These efficiencies, along with a host of sustainability measures, led to the Skokie Police Department receiving a LEED® Gold Certification for the building.

Looking back, Silverberg wonders how the department managed in the old facility without the new storage systems. He says the difference between the old and new way of doing things is “night and day.” “I’m impressed with the storage solution,” he says. “It gets back to our ability to provide a quality level of service. After all, it’s what we’re here for.”